Finality and Intelligence Is the Universe Designed? 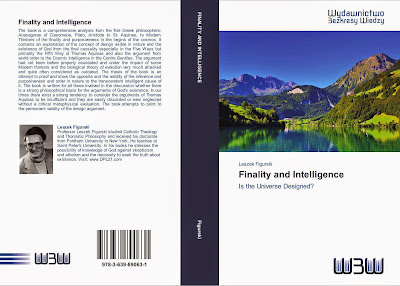 The second edition of the book “Finality and Intelligence” belongs to the elucidation of the problem and analysis of existence of God. The fact of writing on God’s existence in our times maybe surprising to a number of people who are under the spell of the existential confusion in philosophy, literature and art of our times. Frankly speaking, very many people, some of them known scientists in different branches of modern science consider such a topic simply very much out of date. One can hear from many sources statements to the effect of complete lack of interest in such questions. Did not science settle this problem once and for all. Did not even some existential theologians after Nietzsche, Albert Camus, Jean Paul Sartre, Arthur Schopenhauer acknowledge the death of God? Is not the matter settled for good? We also have to mention here the very aggressive group of scientists who openly stress the fact that they are scientists but draw conclusions which are metaphysical in nature. And of course the conclusion whether God exists or not is metaphysical. Metaphysics is also the generally accepted way of analysis of the Universe and God’s existence until the very Modern Times. Philosophy whether for the Ancients or as a matter of fact any attempt to answer the fundamental origin of existence is metaphysical in nature. On this level the mind moves from existence to another existence as the necessary condition explaining the present observation of the universe and it’s intrinsic structure. There are some phenomena immediately experienced, which can only be explained in terms of existence of God. To such belong (1) the rationality implicit in our experience of the world . Human rationality discovers the possibility of knowledge because of the presence of rationality in the structure of the universe. When it comes to higher levels of phenomena we would have to mention (2) life, (3) consciousness, (4) conceptual thought, the power to articulate and understand symbols and meaning of language, and finally (5) the human self. Some atheists claim the existence and necessity of so called scientific reductionism, the evolution of the cosmos, the evolution of life including humans as “arguments “ against existence of God.
On the contrary the book is one of some other books to follow about a serious reconsideration of the problem of God’s existence. No matter how much progress has been made in many areas of our life and no matter how scientific investigations modified our view of man’s position in the cosmos , the nature of the vast immensity of billions of galaxies forming themselves in the vastness of the surrounding world, and no matter how the human life and situation has been apparently dwarfed, the thirst and desire for discovery of some meaning of life is not only not belittled but in the chaos of different views and opinions intensified for the average man today. The problem of God’s existence will be amply analyzed in the forthcoming book by Leszek Figurski “God or no God”.
The present book is an evaluation and analysis of the last Way of the known Five Ways leading the human mind to the existence of God elaborated by Saint Thomas Aquinas. The Fifth Way will be considered within general context of Thomistic philosophy. It is not the intention to analyze all Five Ways of Thomas but center on the ascent of the mind from the orderliness of the finite beings observed in this world towards final infinite intelligence of the First Mover and the First Creative Cause of the world.
The analysis is done on the metaphysical level; it acknowledges the right of the human mind to complete intelligibility of being as such and the power of the mind to answer the ultimate questions to which of course belongs the problem of the existence of God.
Thomas Aquinas was not the first to elaborate the argument from finality and its relationship to the mind, but he developed it and put it on the strictly ontological level .
All the Five Ways of Thomas Aquinas have very similar structure of argumentation. They begin with existing facts which are directly observable and then they attempt to discover the ultimate presuppositions of the observable phenomena . This is why Thomas Aquinas does not use the word arguments or proofs of existence of God , instead he prefers the word ways of reaching the ultimate presuppositions of what is already in experience directly given to man. The Fifth Way is very important for the whole Thomistic philosophy. It points to personal intelligence as a necessary presupposition of the orderly activities of finite causes in the world. The fact that observable entities are goal oriented in their activity must have some explanation. Thomas does not mean here the teleological action of say human beings or even the small degree of teleological behavior of lower forms of life; he is pointing to the fact that in- animate structured beings because of their structured natures contain a presupposition in their activity towards definite goals or ends.
This is why the universe is telos-oriented, this is why human rationality meets the cosmic rationality, this is why science and any kind of knowledge is possible at all , this is why the harmonious orderly world must be finally grounded
in some cosmic intelligence. After all the world did not have to be the way it is ; it could be a forceless chaos, not in any way open to the human mind ; or perhaps it could consist only of photons and electrons. But it is not a chaos but an orderly cosmos as the Greeks noticed and called it at the beginning of philosophical reflection.
To the objection of the evolutionists, the scientific reductionism and some other possible objections Thomas would if he lived in our age simply answer : “re-think the problem carefully and without prejudice and you will realize that there is no other valid solution but mine.” How the argument will be accepted and understood as valid and sound or not is up to the judgments of the reader.


Posted by leszekfigurski14@gmail.com at 5:18 AM