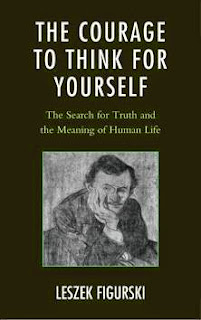 The Courage to Think For Yourself
October 4, 2012
This book was written with the purpose of proclaiming the duty of each individual to search for truth and the meaning of existence. The twentieth century produced such monsters as Hitler, Stalin, and Pol Pot who revealed the deadly drive of people who blindly followed these tyrants. Ignorance, passivity, and sheepish readiness to sell one’s life into the hands of self-made political “saviors” have created the sad reality of our times. Our world today is characterized by a growing cult of political power. There is an almost complete neglect of the individual person and of moral values in general. We should always remember that those who neglect reflection sentence themselves to repeat the same catastrophes and mistakes. Thinking requires determination and endurance. It is not easy. It demands courage to question the most fundamental convictions that may be accepted by others without any reflection or evaluation. Thinking requires courage because it involves a certain risk and may lead to unexpected conclusions. Above all, passion for truth is necessary for every honest seeker. The Socratic saying, “an unexamined life is not worth living,” is as true today as it ever was before.

Similar books and articles
L. Moreva (2005). Essay on the Phenomenon of Indifference. Diogenes 52 (2):37-53.
Lloyd Strickland (2013). Philosophy and the Search for Truth. Philosophia 41 (4):1079-1094.
Jason Burke Murphy (2010). Betting on Life: A Pascalian Argument for Seeking to Discover Meaning. The Monist 31 (1):136-141.
David Guttmann (2008). Finding Meaning in Life, at Midlife and Beyond: Wisdom and Spirit From Logotherapy. Praeger.
Julian Baggini (2005). What's It All About?: Philosophy and the Meaning of Life. Oxford University Press.
Andrew Kernohan (2008). A Guide for the Godless. Published by the Author.
Richard Avramenko (2011). Courage: The Politics of Life and Limb. University of Notre Dame Press.
Per Bauhn (2003). The Value of Courage. Nordic Academic Press.
Claire Horisk, Dorit Bar-On & William G. Lycan (2000). Deflationism, Meaning and Truth-Conditions. Philosophical Studies 101 (1):1 - 28.
Dorit Bar-On, Claire Horisk & William G. Lycan (2000). Deflationism, Meaning and Truth-Conditions. Philosophical Studies 101 (1):1-28.
Earl E. Shelp (1983). Courage and Tragedy in Clinical Medicine. Journal of Medicine and Philosophy 8 (4):417-429.
Alfred Stern (1971). The Search for Meaning: Philosophical Vistas. Memphis,Memphis State University Press.
Laura Bovone, Theories of Everyday Life: A Search for Meaning or a Negation of Meaning?
Doris Hamill (2007). The Challenge of Why: A Secular Search for Human Purpose. Earlynn Books.
Thaddeus Metz (2013). Meaning in Life as the Aim of Psychotherapy: A Hypothesis. In Joshua Hicks & Clay Routledge (eds.), The Experience of Meaning in Life: Classical Perspectives, Emerging Themes, and Controversies. Springer 405-17.
Posted by leszekfigurski14@gmail.com at 1:11 PM