The Existnce of Good God Part (3 of 3) Suffering www.dpl21.com 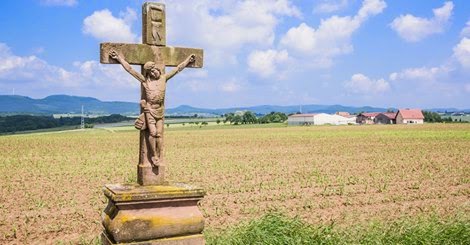 What does it all have to do with evil and suffering in human life? Actually all people consider suffering, pain , torture , war as evil and all this evil is done by man. To a great extent this creates the misery of living together in the society of sinners and it takes away the certainty and stability of life. The suffering coming from the natural causes like diseases, old age, sickness and death are also part of the evil confronting man after his fall and rebellion against God. It all has to be accepted as part of growing in this life towards complete absolute trust in God no matter what happens. Only this strong faith in God in spite of misery and tragedy will make man strong enough and acceptable to God who is love Itself.
Leo Tolstoy one of the most talented Russian writer in his fifties experienced a deep doubt about the meaning of life and felt a growing desire to commit suicide . He was hiding any guns and knifes visible around afraid that he will kill himself . He says that the desire for ending his life became more powerful than his joy of living. He learnt from the simple peasants who lived in poverty but were happy to exist and live. Tolstoy concluded that life no matter how difficult must be meaningful.
Man according to Christianity has an immortal principle (soul) and therefore death is not really such a great tragedy and horror as it may appear in the eyes of an atheist. For a Christian death is a transition from this life in space-time, into eternity.


The Judgment implies  not only eternal salvation in heaven but also the possibility of hell. One cannot say much about the judgment of God.   All knowledge about it comes  from the teaching of Christ who very often  mentioned the reality of judgment and  man’s eternal   destiny.           For many there appears the difficulty to  reconcile the loving and forgiving God   with existence of hell . Hell is    existence  in complete isolation  from God and others  in eternity without possibility of any change. This seems to many  absolutely unacceptable  and too cruel, it  seems ridicules and absurd part of Christian teaching.  How can God who is love and who wants salvation of all men  throw someone into hell  knowing  human limitations  and  mistakes  even when  the sinfulness is  clear  like deliberate murder, torture , exploitation of others and even  intended extermination of millions of innocent people. After all  when Christ was  dying on the   cross did He not pray to the Father:  “… forgive them for they don’t know what they do?.. All this  is true. However  one should not  approach the problem of hell on emotional level  only but try to see facts as they are. Suffering is the very center of the human condition in a world of fractures, conflicts, dichotomies and tragedies. Suffering is therefore inscribed into the very core of human existence. This fact is recognized by most religions of the world and also stressed by the ancient writers like Sophocles in the story of The Blinding of Oedipus. In Buddhism, which some consider a religion, life is suffering and the human soul is gradually liberating itself from it through a number of reincarnations until it attains the state of complete bliss in Nirvana.

In Christianity man’s condition is infected with evil mainly of man’s own doing. Man is a person and therefore responsible before God for his acts. The objection against existence of hell is based on the unimaginable decision : I want to go to hell and be eternally miserable ! Nobody consciously would make such a decision because he would have to be his own enemy and in love with misery rather than happiness . However every day hundreds of small decisions are made. Those decisions accumulate through a lifetime and they form the character of the person and the direction of life. If therefore man is completely dedicated to the values hostile to the commandments of God and lives in this way for longer time he becomes completely alienated from God. When a person dies in a state of hostility towards God there is a possibility of eternal loneliness and that is hell.


Christ, the Son God became man to show human beings how to live in such a way as not to end in this final rejection. People do not willingly choose to go to hell but man cannot escape from decision making for to decide not to make a decision is a decision also. God respects human freedom even when it becomes evil. The following Christ’s parables illustrate possibility of hell

The dragnet catches all kinds of fish, and the fishermen make a selection. The bad fish are thrown away .

In the story about the great banquet a rich man sends his servants to his friends with an invitation to come. But all of them find excuses not to come. One says that he bought a piece of land and he has to inspect it. The other says he bought a pair of oxen and must try them and the third one says he just got married and therefore he cannot come. The Lord of the banquet gets angry and tells his servants to invite anyone and everyone so that his place will be filled with guests. However when the Lord of the banquet observes one who is not dressed properly for the feast he orders his servants to throw him out. There is nothing wrong in buying a piece of land, a pair of oxen or to get married. The excuses however show that the invited friends do not value much the invitation nor do they show respect for the Lord of the banquet. The usual activities of the day are more important for them.

In the story of the last judgment ( Mt. 25) the judge , Christ himself ,divides all people into two groups. The group of “ sheep” on the right. Christ turning  to those on the right says : come you blessed of my Father and inherit the Kingdom prepared for you from all eternity – for I was hungry and you fed me , I was naked and you clothed me , I was in prison and you came to me.  And the people ask:  “ Lord when  did  we feed you, or clothed you  or visited you in prison? Christ answers : ? “...Whatever you did to the  least of my brothers you did it to me....”

Those on the left  are  rejected. They did not show any love or concern for others and when they asked  the same question :  When did they not do service to Him?  They receive the same answer:  “Whatever you did not do  to my brethren you did not do to me.”
The services mentioned by Christ are not  necessarily very spiritual in nature : food and clothing are very material services and  it does not matter  to whom one serves them. One simply helps the person in need without any gain for oneself.  It does not matter  who the person is or what  position he has in the society.
In the parable of the compassioned  Samaritan   the same truth is stressed. The merchant did not know the wounded man lying in the ditch . It was not his relative, but on the contrary  as a Samaritan he was an enemy. He not only took care of him but  he took him on his  beast and brought him to the innkeeper , paid  money for the care of him and promised that additional expenses he will pay on his return. .
God is always ready to accept  anyone  if he  honestly and sincerely tries to turn away from evil.  The father of the prodigal son was waiting day by day  and  searching with his eyes the horizon until one day he saw  still far away  the  son coming slowly   back to him. He did not say anything  but full of joy embraced his son and  told  servants to give him the new robe, sandals and a ring on his finger. There was feasting and singing. The older son  who was in the fields heard  the music  and asked what  is going on. He was told that his brother returned    and father was extremely happy to have him back. The father  knew only one thing : This son was lost and he is found again, he was dead but is alive. It is proper to celebrate such a joyous event.       To the proud Pharisees thinking themselves to be very good people and  having God’s favor already, Christ said that  publicans,  tax collector and prostitutes will be first in heaven. Why ?  Because they repented of their sins and therefore  the first will be last and the last will be the first. God’s judgment  is not   very much like human judgment.
Man therefore is  his own quasi-creator of his own future and  destiny . Imprisoned in his sinful attitudes man needs help  and liberation  from his condition.  This is  salvation brought by the incarnation of the Word  becoming Man. Christ calls Himself often The Son of Man, because  He suffered  as the Son of Man and  was  identified with humans.  He  became the Savior and Liberator from human  bandage and slavery. Every action of God  towards man  is always  a gift of freedom in some form or another
.

Posted by leszekfigurski14@gmail.com at 3:29 AM