Abolition of Man. Is God Dead? Atheism and It's Consequences. Part 2

Whenever one thinks seriously  he/she is ultimately  concerned with  meaning of human existence and  without  a solid conviction about values in general,  and  moral values in particular there is no  sense to seek any meaning at all . That is any durable meaning        . Atheism  is based on the vision of the universe  which  is devoid  of any transcendence and the idea  that one receives any truth from God  is radically rejected and replaced  with the idea  that reality is unstable zone between phenomena unknowable in themselves and fields  of mental activity by which they are apprehended. God does not exist  after Nietzsche and other atheists and  if God does not exist then there are no transcendental values.

Human beings are  accidental byproducts of the cosmic forces,  not different in any  deeper  sense from any other  form of life . Man is now reduced to the level of a   thing. He/she is no more   significant  person deprived of any direction of life. Why?  Because there are no directions since God is dead. It is important to remember that the negation of any transcendence  is  a radical negation of any reality which  would be  somehow immaterial in it’s nature and not reducible to matter-energy in movement . This cancels  out  already  God  because  His nature  as an immaterial spirit is of course transcendent to matter in movement.  Human beings  are  nothing else but  also  forms of matter in movement  because there is no  spirit in man , an immaterial center of the self-conscious person any more.  The universe does not show any  unified  sense or traces of meaning .  Man however    is  ambiguous in his/her  inclinations  and self-centered purposes . Since God does not exist everyone is god to himself and since  objective values do not exist either  because the  were founded in the will of God not existent now ,  human beings  create their own values . Whether something is good in moral sense or evil in  moral sense is a distinction which belongs to the past. There simply is no such thing  as moral good or evil because the source of objective moral values God himself does not exist.

Man therefore  does not anymore use  moral language . Since man is only material  in his/her consciousness and  sub-consciousness  man  is no more one-self-directing-self but  is a thing. Man is  well-functioning  and efficient   when healthy,  and  malfunctioning  bundle of impressions  and different parts  which can be to some extend fixed like  an old car or some other dysfunctional  gadget. If  fixing  is  impossible, man is discarded like a piece of junk. Judged as  unwanted  element  for some  imaginary reason  he/she  will  end up  as  a little  pile of ashes like during the Hitler’s  and Stalin’s time.

Since there is  no objective  moral evil or good  we use  a language  which is  adjusted  to the  modern  way of looking at man. There is no objective  morality and there are no  moral duties . A human being  can be  sick , maladjusted , anti-social or depressed,  but  there is no  moral  evaluation here. And since  there is no  moral good or evil           nobody  is really  responsible  because as already mentioned  he/she is only malfunctioning thing. In his book  “Beyond Good and Evil” Nietzsche  rejected    any traces  of Christian morality  and glorified  some sort of  “higher  kind” of man of the future . No wonder  that  the language  of  the german storm troopers  and  creators of  concentration death camps  was full of  words like:  herenvolk and  master race.
Objective morality is a morality coming from the transcendent  God Creator of man. It expresses God’s purposes for humans  and it elevates  every human being to  the  status of  God’s chosen partner. For atheists  all this  is  gone. However since  human s still live  in some form of society there is a necessity  to have  some  behavior  classified as proper, legal orderly and  deserving praise the opposite form of behavior  are  labeled  as disorderly  mall adjusted  dangerous for society  and criminal.  The    ultimate criterion  of  value of man  is his/her functioning in the society  according to  some  human laws and prohibitions  enforced by  the judiciary  and ultimately  by  police force, incarceration  and even execution.

If God does not exist then man is nothing more  but an animal only, and  one does not call animals moral or immoral. When a lion  hunts down and kills a zebra in the wild steppes  one does not say this lion is an immoral criminal because the animal simply follows instinctual ways of acting, feeding,  multiply and so forth. When those needs are  satisfied  the animals rest and  they will kill again only when they feel hungry. Man however  can be worse than  such animal because  he/she will enjoy killing and even feel satisfaction  in  brutal sadism. The psychologist Eric Fromm in his  book “ The Heart of Man” it’s genius for good and evil  shows  the contradictory character inscribed in the very nature of  man. He divides people into  two classes : the    ones who love life and whatever  lives (biophilia)  and those  who are  loving  death and destruction of all source (necrophilia) . History of humanity shows  periods of  the  domination of those who belong to necrophilia . People like Nero , Caligula, and in modern times Stalin, Hitler and similar political leaders  belong definitely to  necrophilia  they do not hesitate  to lead  millions upon millions of people into  death and perdition in the name of   some  insane political ideology. Eric Fromm  shows also in his book the  sadistic  watching of thousands upon thousands of people how  a group  or even two individuals only  fight each other quite often to death.  This is the  ambiguity of values when it comes to behavior .

Atheism must ultimately end up with radical materialism, which acknowledges only  matter in movement . It follows therefore that all reality  is one- dimensional and therefore  there is no basis of  any distinctions on which to build some ideas of values of any kind not only  moral values but any values . Each process of matter is  simply what it is  and to call it  good or bad , better or worse , healthy or unhealthy is simply an unjustified way of speaking only. The question about meaning of human existence  and the  values open to human decisions is simply a delusion. Many atheists of our times openly constantly stress the meaninglessness  of  human beings sand their existence. The noble price winner Steven Weinberg, the physicist  at the University of Texas   says that:

….”What we are learning about physical law  seems  coldly impersonal and  gives no hint of meaning or purpose.”  In his book “The First Three Minutes,”  Weinberg wrote, “  the more universe seems  comprehensible , the more it also seems pointless. The zoologist  Richard Dawkins of Oxford University wrote in 1995  that the world is “ neither good or evil, neither cruel or kind, but simply callous : indifferent to all suffering and lacking  all purpose.”  Dawkins also said that “… the universe we observe  has  precisely the properties we should expect if there is   at bottom  no design , no purpose, no evil and no good, nothing but pointless indifference. Allan Dressler  an astronomer in Pasadena CA  says: “…many scientists seem to be on a crusade to run down human worth because  they think  that it will destroy  the arrogance  that leads to religious  intolerance  but it make also  science  meaningless and soulless.” Jacques Monod of France  in the book “Chance and Necessity, says “ Man knows at last that he is alone in the universe’s unfeeling  immensity out of which he emerged only by chance.” Jessica Mathews  the head  of Carnegie Endowment , Washington D.C. says in 1996 that men and women should  accept “… that human life is a cosmic accident without any purpose…”

Since there is no God and the universe is completely purposeless and  devoid of any meaning and man is the product of such universe it  follows that man is meaningless absurd and devoid of any value whatsoever  because  he and his existence is nothing but  a purposeless accidental  phenomenon. If we fall back on scientific language describing what happens to the cancer patient  that “ normal”  cells  become “abnormal” and that the body  undergoes  a process of what we human call illness  are we not asserting the vision of life that involves norms ?. Are we not dividing the world between  healthy entities and sick ?. Are we not still according  grater value to the consciousness of the human sufferer that to the molecular processes  within the body  which lead to it’s dead? What justifies this hierarchy of values except our own imagination? (Suzan Sontag in the book “Illness as Metaphor.” )
Indeed  if God does not exist,  and the universe is  nothing but a blind   material process  and  human beings are  insignificant and purposeless byproducts of this process,  then any talk about any values  of normal of abnormal, good or bad ,  better or worse  have no basis  at all . The abolition of man  and all he represents is complete.
All this above would be  worth analyzing, if atheism  were  not  built on a number of contradictions  and  errors  of experience  and  knowledge  but it so happens that  it is  neither  coherent , nor  logically  and  epistemologically  justified.

Easterbrook, Gregg, Beside Still Waters, Searching For Meaning in an Age of Doubt, William Morrow and Company, Inc., New York : 1998
Fromm, Erich, The Heart of Man, Harper & Row, New York: 1964
Delbanco, Andrew, The Death of Satan, How American Have Lost The Sense of Evil, Farrar, Straus and Giroux, New York: 1995 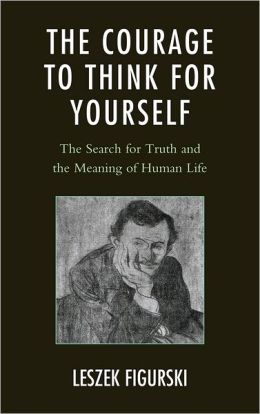 Other books by Leszek Figurski and co-author Irene T. Ciszewska

Finality and Intelligence, Is The Universe Designed?

Posted by leszekfigurski14@gmail.com at 8:10 PM No comments:

Posted by leszekfigurski14@gmail.com at 2:11 AM No comments:

'God's Not Dead': What low-budget hit says about Christians and Hollywood

'God's Not Dead': What low-budget hit says about Christians and Hollywood
Posted by leszekfigurski14@gmail.com at 5:38 AM No comments:

Alvin Plantinga’s Where the Conflict Really Lies: Science, Religion, and Naturalism | Reasonable Faith
Posted by leszekfigurski14@gmail.com at 5:10 AM No comments: